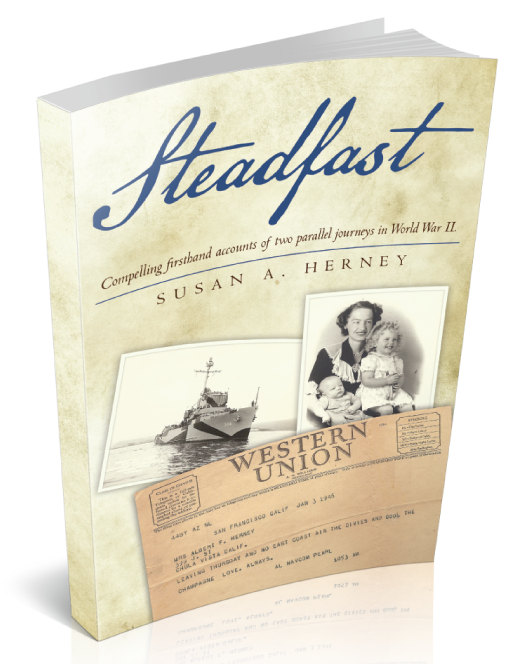 Thoroughly researched and well-illustrated, STEADFAST is an annotated memoir of navy service aboard minesweeper USS Scurry in the Pacific Theater, and a documentary of concurrent life on the home front.

“It’s a must read: For the greatest generation it’s a reminder. For those who are younger – a lesson plan. “

Get an insider’s glimpse into life aboard a World War II naval ship with author Susan A. Herney’s fascinating epistolary memoir Steadfast.

Comprised of the poignant, heartfelt, and even humorous correspondence between her father, Ensign Albert Herney, and others—including her mother, Dot—this touching story unfolds from Al’s departure in October of 1943 until his return home as a seasoned sailor and Lt. j.g. in January of 1946 after sixteen long months at sea.

As communications officer aboard the minesweeper USS Scurry, Al was one of many navy reservists who struggled to acclimate to active duty. Through personal letters, Al reveals the shocking realities of war, as well as shipboard drama and the mundane routines that existed on one of the navy’s smallest wartime vessels.

A touching narrative of bravery and hardship both abroad and at home, this stunning collection of letters will prove a true treasure for World War II buffs.